When someone talks about Belgium, the first things that come to mind are beer and chocolate. Two things we have been known for for years.
A couple of years ago – 10 years ago to be exact – we got to add one more item to that list: Tomorrowland. The festival that was once again voted “Best International Dance Festival” in the world!

Every year, millions of people from around the world are hoping, praying,… for the opportunity to buy tickets to attend. However, only a lucky ‘few’ get to beat the system and get their tickets. This year, no less than 360.000 people from all around the world will join ‘The Madness’, thanks to the “Anniversary edition” (instead of the 180.000 of Tomorrowland 2013). And me, I’m one of the lucky few!

Numbers revealed that 214 (!!) different nationalities attended Tomorrowland in 2013. That’s more than the number of nationalities that attended the last edition of the Olympic Games!

Brussels Airlines added 140 additional flights from 67 different cities, to make sure that all the visitors from around the world would be able to get to Belgium in time. 29 of those additional flights were completely filled with festival-goers. In total, Brussels Airlines transported over 8.000 people for the festival.
Flights came in from our neighbouring countries Germany, France and the Netherlands. But also from Canada, USA, Australia, Sweden, Switzerland, Israel, Singapore, New Zealand, Mexico, Japan, Brazil,… and many many more.

Those numbers take my breath away each and every time I read them. One of the moments I look forward to the most at Tomorrowland, is when the DJ’s ask us to raise our flags! It’s one of the most impressive sights I ever got to see: the number of different flags, colors, nationalities united at Tomorrowland is amazing!

Even more amazing is the fact that the festival always happens without major incidents! At Tomorrowland, there’s no such thing as borders, wars, conflicts,… We are all there for the same thing: to experience an amazing weekend with friends, dancing to the beats and enjoy new encounters! 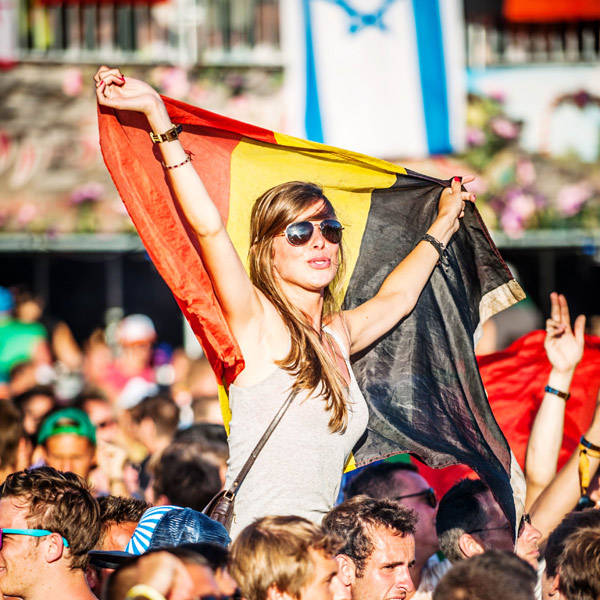 There are many reasons why I look forward to Tomorrowland. (I’m litterally counting down the days!) One of those reasons are the international encounters I have every year.

Last year I spent the better part of the day on Friday with a woman from Kenya. At the end of the day she gave me a bracelet that she made herself at home. She took them with her to pass them on to the people she got to know at Tomorrowland, so that we would have something to remember her by.

At the camping, my friends and I were staying next to a group of people from Sweden. We exchanged stories from our countries and our customs, which are always very interesting stories to hear!
Fun fact: Swedish people are ridiculously good looking. I have met several of them over the years and they all look like models. Must be something in the water there 😉

I also remember an encounter with some people from Italy, who brought some typical Italian products to the camping site and went around everywhere to make sure a lot of people would discover them.

Part of my world

This post might not give you a typical image of “Belgium”, but it’s part of my world. It’s a part of my world that I love to share, because in a world of conflict, wars, crisis,… It’s important to focus on the moments that bring people together. In peace!

8 thoughts on “Yesterday is history. Today is a gift. Tomorrow is a mystery.”